When I attend weddings as a married woman, I notice EVERYTHING. Some things are about the wedding itself: “Wow, this food is phenomenal! Our Korean food was good, too.” “I love all the attention to detail.” But those things aren’t what stay with me and spur me to write when I really should be sleeping. The bride and grooms’ family dynamics and cultural nuances fascinate me, specifically in contrast to my experience on my own wedding day. It’s like National Geographic for me – just studying the way different families and cultures do things on this monumental occasion.

It’s interesting to see myself verging on “tattling” on my culture in a blog, as anyone who knows me knows my Korean pride. One of my college roommates brought home a houseguest who stayed with us for a couple weeks. After getting to know me for that short stay, including how I just could not FATHOM why a blonde and blue-eyed classmate was trying to court me, she jokingly answered his phone call with, “Jihee’s not home right now. Her Korean supremacist meeting is tonight.”

My family immigrated to these here States when I was four-going-onto-five, on August 15th, the summer before kindergarden. I was raised in Los Angeles, CA until college. Though I try to act like my Korean is solid, I have to confess that my English is far better. First generation Koreans in Flushing, NY, ask me to please, just speak English to them.

My point is that although I wasn’t born here, I was raised here. So why do I feel like I am from another planet, or a recent immigrant, when I am at non-Korean, or non-Asian, weddings? Many times I have to keep my jaw from falling to the floor when I witness a scene so sharply contrasted from my bridal experience. Though I am American, Korean roots have firmly been planted and nowhere have they surfaced more prominently than in my marriage to a fellow Korean-American.

These are my realizations as to why I feel such culture shock at American weddings. (Disclaimer: I will be speaking in generalizations so please know that I am fully aware that not ALL Americans and Koreans have these experiences.)

1. Mother-in-Laws. My biggest shock. At American weddings, mother-in-laws will gush poetically about their daughter-in-laws, the brides.

“I could not have dreamed and prayed for a better woman for my son!”

“My daughter-in-law planned this whole wedding all the way from the other side of the country and she could not have done a more marvelous job. She is truly amazing.”

“I love you like a daughter and you could not look more beautiful today. Thank you for joining our family.”

(My jaw has to be picked up from off the floor or else I can’t finish my prime rib.)

I have even witnessed mother-in-laws kissing up to their daughter-in-laws to win their favor and friendship, desperately trying to be close to them. My own experience was not quite the same. If you look through my wedding photos, you will notice a lovely woman in her 50s who looks like she had clearly walked into the wrong church. She looked like she was sitting through a funeral, not a wedding. Her face grew more morose as the wedding progressed. During the mother-son dance, she looked like she was going to fall into a big heap in her hanbok so that she can do a proper Korean funeral wail that had been building up in her soul. Now, I can tease her about it while she tries to play it off, but I still have the image of her lugubrious face especially when I’m attending American weddings where the mother of the groom is happily rump-shaking on the dance floor.

2. Emotions. American brides can truly bask in the glory of their superstar day without feeling embarrassed or self-conscious about thoroughly enjoying the spotlight. As they should. Koreans have a mentality that I seem to have subconsciously signed up for. It is very Joy Luck Club, putting yourself down or minimizing your achievements and even your degree of happiness because it all feels too brazen or even too American to self-congratulate.

For instance, I am THE MOST EXCITED (and comfortable) when I hear about OTHERS’ great news, like engagements and babies. I can express my joy more easily whereas for my own milestones, I feel the Koreanness seeping in. “Girl, you are NOT the world’s first bride. You are NOT the first or only woman on Earth to be giving birth! Stop making such a big deal about it, princess!” Needless to say, I may not have been able to soak in everything on my own wedding day, though it was still one of my favorite days. Maybe I wish I could have? Some of my Korean-American friends were able to but some of us can still bond about the behind-the-scenes dynamics. But I could not fully let go.

3. In-law relationships. I am almost always shocked to see in-laws at American weddings joke around irreverently with each other and make plans to hang out again casually (voluntarily!), beyond obligatory formal occasions, and sometimes (gasp!) even spend the holidays together. I know a couple of my Korean-American friends are blessed to find themselves in this category as well but I do not. Koreans GENERALLY tend to keep the in-law relationship a bit distant and formal so that there is no overstepping of “regulations.” I was going to say boundaries but that is not the right word. It is easier in some ways if it is an interracial relationship as regulations and expectations are thrown out the window, but that is a whole other topic. There is so much propriety and duty in what the bride’s side is allowed to do and what the groom’s side is entitled to. Generally, the groom’s side is priority.

Right after my own wedding, my husband’s paternal grandmother from Korea told me and my parents in the parking lot of a Korean restaurant in Los Angeles that it was wrong for them to even join us for lunch, that they are dead to me now that I am married. And my parents just bowed and said, “Neh, neh, gurumyo,” (“Yes, yes, of course”) since they understood the culture and the era she came from. She even told them that they do not know their place by showing up after the wedding to take us to the airport to catch our flight to our Hawaiian honeymoon.

Also, when I was a new wife, my MiL sat me down to make a very traditional Korean speech about how I should shed my Lee ways for the Kim ways that are better, and asked if I can accept the position as first daughter-in-law by consulting her on everything, and that if I do not, I am relinquishing my position. She learned right then that I am VERY American and that I won’t false peacemake by saying Yes, yes. Don’t NO ONE tell me to shed my fami-Lee’s ways as THEIRS are better. (We have come a long way as I have rubbed off on her somewhat – to talk to each other as two individuals with different ideas and backgrounds instead of letting antiquated tradition dictate how she should talk AT me.)

4. General merriment: People are GENERALLY stiffer at Korean/Asian weddings, especially in the presence of the first generation. So I find it fascinating to see folks of all ages really get their boogie on at weddings without any hint of self-consciousness. I think I like that.

Again, much love to my Koreans. We may be set in our traditional ways and not inspire a Nancy Meyers movie, but our actions do also speak louder than our (lack of) words. My mom shared with me a story she read in the Korean newspaper about how a Korean bride wished her parents were more like her expressive, effusive White in-laws but when they were faced with a financial emergency, her parents somehow saved enough money to help her out, even when they poor themselves. Sacrifice. Without a word. I also realize that no matter what kind words people may say at weddings, that does not guarantee that everyone will get along as mother-in-law jokes are as American as apple pie.

But this Korean gal, even as a mama herself now, still finds herself daydreaming at American weddings, wondering what it would feel like to star in a movie more like “Father of the Bride” than “Joy Luck Club.” 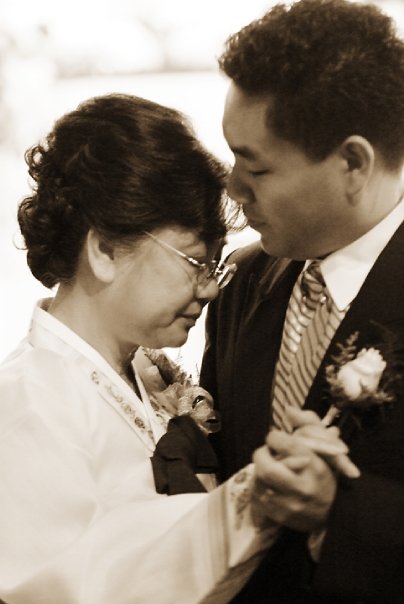 my parents ain't stiff though 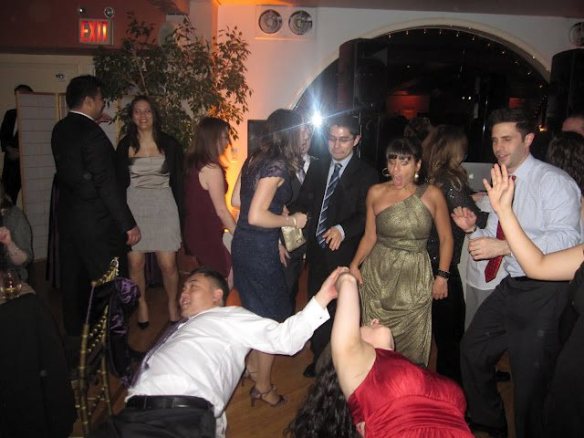