I have been having a hard time this past year, maybe acutely so the past few months, not just because I am so very tired but because I have forgotten how to allow myself the right to feel feelings. AND NOT JUDGE MYSELF FOR THEM.

I imagined the reactions of Others, to the point that I would actually have two-sided conversations in my head. It wasn’t purely my active imagination. I had been receiving messages from strangers and acquaintances alike that my feelings were not valid. More on conversation-crushers later.

October 1, 2012. The night before, on Chu-seok (Korean Thanksgiving), the husband and I had finished watching the season premiere of our favorite show, “Homeland.” After being thoroughly riveted by Claire Danes and Mandy Patinkin, I went to pee and noticed some brown spotting on my undies, like a very light period.

So this is how it was gonna go down. My body was going to give my second baby a nearly identical birth story as big bro, even down to the Thanksgiving arrival (first one was on American Thanksgiving). Down to the day – ten days before their respective due dates. Big bro had arrived within 24 hours after the spotting. So I knew that once there was blood, baby was a ‘comin’ despite doctors shaking their heads, schooling me about spotting not necessarily meaning imminent birth.

Please. I knew my body.

After hours of fitful sleep with lots of cramping, knowing that baby was going to show up that day, the contractions intensified and became more frequent at dawn. The timing couldn’t have been more perfect as my mama was supposed to touch down at JFK from LAX to take care of my firstborn that very morning, while I go birth her second grandchild. We ended up sending her a Korean cab in our stead because it was Go Time. We threw a few essentials into the hospital bag, wrote a quick note to Belly Baby about how we felt as we were hours away from meeting him/her, and were about to drive on over to the hospital.

My mama was dropped off at our place and immediately, my contractions slowed down. I even told Kevin to go to work that day so that we wouldn’t waste one of his precious vacation days. Just like when I went into labor for big bro on the eve of Thanksgiving 2010.

Apparently, I had been watching too much “Parenthood” (another one of my fave shows) because I pictured my mama coming through the door to the rescue, with some great background music to beautify an already beautiful moment. Offering me my final moments of tranquility and soothing affirmations as she swooped in to take care of my 22 month-old so I can labor with dignity in our dark bedroom. I even pictured our bed enveloped by a gossamer canopy while I breathed through the pain. How poetic. Cue cool, alternative music. Circle of life. My mama arriving to taking care of her child while I got ready to birth my own.

But of course, my life is the opposite of critically-acclaimed dramas on NBC. My mama touched down, sho’ ‘nuff but it got more chaotic than ever. She was so excited to arrive and wanted to tend to All Things Micah that I got sucked into her Tasmanian Devil flurry. I was wincing from my contractions as I showed her where everything was. Micah’s diapers and wipes and other necessities. Explaining how to care for him.

I was doubled over in pain at times, completely hunched over and she would ask, “Where is the sesame oil, Jihee-yah? I have to make Micah some lunch.” Not because she is heartless but perhaps because I wasn’t making a big deal about my contractions and she was really diving into her role as Micah’s caretaker.

I didn’t feel like I could rest. Or pause to tell her that what I needed at that time was a “Parenthood” moment with the imaginary gossamer-canopied bed symbolizing much needed rest and mental space and a perfectly scripted Mother-Daughter chat as new background music started for my visit to the hospital.

It was already near the end of Kevin’s workday when I nonchalantly called him to say, “Hey, it’s Game Time. I haven’t eaten all day. My mama got distracted and so did I, so can you please bring me enough food from near your office? You know I am NOT trying to give birth on an empty stomach.”

Kevin brought home a buffalo chicken wrap. My mama was so whupped on her first (and only) grandchild that she started tearing off pieces of MY final meal to harvest for her beloved Micah.

I tell you this story to say that since then, ALMOST EXACTLY A YEAR AGO, I have been SO. VERY. TIRED. Shouldn’t come as a surprise because looking back, even as I labored to bring my second child into this world, I couldn’t get NO REST!

This state of constant unrest, day and night, sleep deprived and recovering from tantrums and spills and failed disciplining and mealtime battles and other soul-wearying scenes, with breaks that only the husband gives me since we have no REGULAR village, has wreaked havoc onto my mental and emotional health. 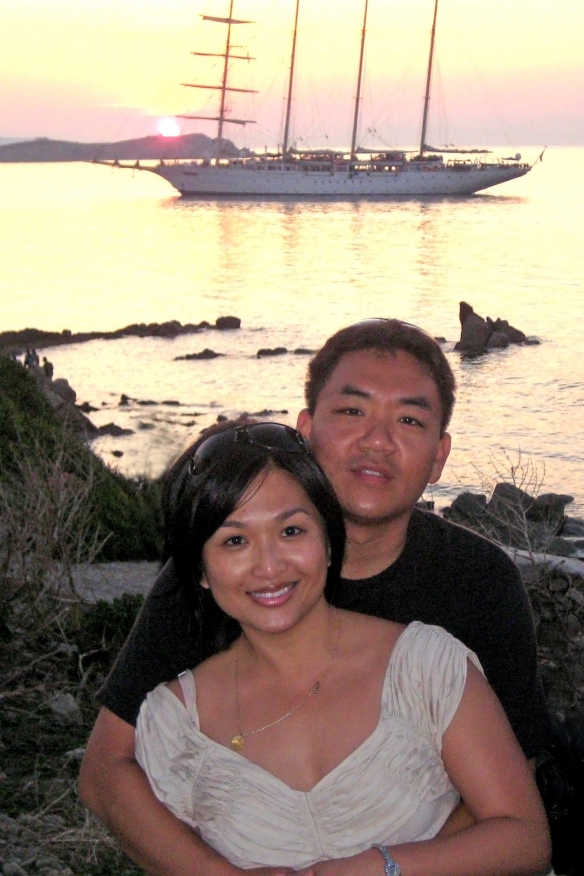 me and the husband in 2009, well-rested punks, ringing in my birthday in mykonos, greece, when our children weren’t even glimmers in our eyes, photo-edit credit to Jason Kim

I realize that I mention lacking a Village all too often yet I cannot stop. “Village” as in at least one set of grandparents, other relatives or family-like friends who will say, “I GOT YOU.” Not just watching as I take care of them, alerting me to their soiled diaper but to really GOT ME so I can leave. Not even for something as luxurious as mama hitting the spa but just so we can run an errand that is not conducive to the entire family rollin’ or to declutter the home without tripping over a toddler or infant, only to get completely distracted by their noises and needs. I get pissed all over again when I hear others call in their Village People to give them REGULAR, healthy breaks from child-rearing, offering mental health breaks as often as weekly. So heads up: I will keep mentioning this until I get to a healthier space.

While more joyful than I ever imagined when I nibble on my kids, I also find myself feeling so very angry that I have to do motherhood in this particular way. Simultaneous joy and anger ARE possible.

All made worse because I haven’t been able express myself adequately after experiencing conversation-crushers like:

“Billions of women do the motherhood thang so I figure, how hard can it really be?” (Actually, this one was an innocuous comment one of my best friends made before she had her first child. After her first few months with her newborn, she ate her words).

“Oh, but you know you have to ENJOY EVERY MOMENT! It goes by SO fast.”

“But you are so blessed! Some people can’t have kids and here you have two beautiful, healthy kids.”

“My friend’s child is special needs and she never complains. My other friend has four kids and she is always keeping it positive. I try to do the same.”

“Oh please. Not everyone has a Village.”

And most recently, when I was sighing during dinner as another harried scene unfolded, my mother-in-law chided, “C’mon, you have to admit that it’s all better than NOT having kids, right?” At least she seems to have retired her favorite: “I had it MUCH harder than you,” after I asked her to please stop saying that to me.

With all those conversation-crushers, how can I feel safe enough to say, “While I realize I am SO BLESSED, this is SO VERY HARD, in ways that I could never have imagined, not just for one reason or because of ONE bad moment but an accumulation of so many moments and factors at play…”

And shout out to a new season of “Parenthood” airing tonight on NBC.