I can write at least 58 different posts on this one topic alone, the topic being “Things I Used to Judge Only to Do Them Now.”

When I was pregnant with my firstborn, MLK, I had somehow developed a stance against kiddie pay-to-play classes like Gymboree.

I’d be all, “Augh! Why would I pay more than my own adult gym’s monthly payments so that my kid can LEARN to PLAY? That is too yuppie for my taste. I’m old school. I’m au naturel! Why would my kid attend some sorta hakwon as a baby!?” [“hakwon” = Korean prep academy / afterschool enrichment]

Then I happened to take him to a trial class. Not only did I promptly sign him up, we became loyal Gymboree members, referring more than a dozen other kiddos and continuing our membership for longer than any of our peers. It wasn’t about learning to play as I had initially thought, but rather, having a colorful, inviting space to play in regularly, other than our same ol’ same ol’ living room or other buddies’ living rooms.

Micah started looking like Billy Madison among babies, when we finally quit two whole years later, at 31 months old. I almost couldn’t go through with terminating our membership because Gymboree was so beloved by both Micah and Mama, such a big part of our lives as newbie mama and first baby, but it was time. (Ellis as second-born never got to join Gymboree as you’re not allowed to bring your older sibling to the younger class. Too Godzilla-like).

When I was pregnant, people warned me mostly about sleep deprivation, or made vague and ominous declarations like “Your life will never be the same again,” but not about how my weekends would usually include a kiddie birthday party, sometimes back-to-back, before and after naps. Thankfully I still enjoy them, especially watching these little guys light up, but I used to judge elaborate kiddie birthday parties. Hward.

My natural gut reaction was to scoff at how fancy these parties were becoming compared to my childhood where my McDonald’s birthday party was my most pimped out.

We recently went to a sprawling gymnastics birthday party for a cute little three-year old friend of Micah’s (who we met at Gymboree as infants). The gymnastics academy was one of the best venues I’d seen for these active toddlers to tumble around in, complete with a foam diving pit and largest parachute ever. The hosts were so inclusive of their many little buddies that this was the biggest party we had been to…since her 2nd birthday party.

I was wearing Ellis, having a hard time side-shimmying through the crowd during lunch as everyone had to squeeze in behind their seated little ones on a long table and accompanying bench. I watched all the parents obediently file into line, shoulder-to-shoulder, behind their children, amidst commotion, to receive their standard party rations: pizza and cake. Because this party was so big, the tables and benches kept you from mingling about. Strictly single file line. You bess stay at your station.

I saw my good friend multi-tasking, feeding her son and looking out for Kevin by asking him quickly, “Did you get your pizza? You were able to eat?” Kevin, while keeping Micah and Micah’s juice from falling off the bench and table respectively, quickly responded, “Yup, yup, I ate, I ate. Plenty, thanks. You got one, too, right?”

It was heartwarming. They were Tim Robbins and Morgan Freeman lookin’ out for each other in the prison mess hall.

Before I had these kids, it was all too easy to snub my nose at these modern day birthday parties because they just seemed too fancy compared to my own childhood. I’m talking gymnastics, carousel, museum, zoo, petting zoo, circus, water station, sprawling “treehouse,” Gymboree, My Gym, Bounce U, farm, and more.

Just yesterday, Micah came home excitedly after attending his buddy’s birthday party with his Daddy while Ellis and I had to miss due to Ellis’ fever.

“Did you have fun at E’s party? Was it fun on the schoolbus!?”

He had had a blast at the Fun Bus party. A Fun Bus is a schoolbus painted all cute with its insides gutted out so that kids can tumble and swing around.

Micah taking a break from Fun Bus er, fun, to peek out at his Daddy / photo credit: his Daddy 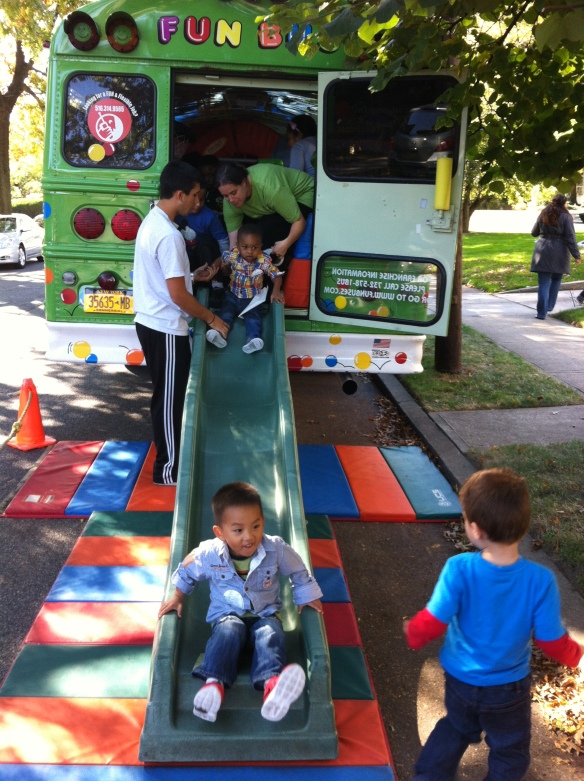 I remember a childhood friend telling me, “Jihee, my son went to a party where they had a Bubble-ologist. The weirdest part is that he called HIMSELF that. With a straight face.”

I used to think that I would be able to resist this party culture for my kids but just like with Gymboree, I saw how much he enjoyed himself and how his little buddies, especially now that they aren’t babies any more, really understood that it was their special birthday celebration. Plus, many of us live in small NYC apartments so it’s a matter of practicality. There is just no way to host a party in our own homes unless you invite only two little friends and their mamas.

I’ve slowly come to realize that I can’t keep comparing to my McDonald’s party of yesteryear because this is a whole new world. I was learning this new invention called “computer” on an Apple IIC or IIE in our elementary school’s computer lab, stressing about learning how to play a new game called “Carmen Sandiego” while some toddlers these days have their own iPads. Naturally, the landscape of birthday parties, especially in cities like NYC or LA, would get suped up.

I know I’m a dinosaur but what is up with themes? These days, great parties and weddings all seem to have a theme. Was just thinking that today’s hipsters may throw an ironic McDonald’s-themed party, complete with retro uniforms and modernized purple fondant Grimace cake.

“Does Ellis have a theme for his doljanchi?” asked one of my best friends recently, as she planned her son’s in LA.

“Watchoo mean ‘theme’? The ‘THEME’ is that he turnin’ One and we feeding our friends and family a gluttonous amount of food and dduk. And hiring his music class teacher to do some dope kiddie songs for 45 minutes!”

Online stores like Etsy make it easy to choose a theme like “Carnival” or “Rock Star” and buy accompanying decorations but it’s just one more thing to have to make a series of micro-decisions about. That is what I am allergic to in event planning: how tending to just “x,y, and z” soon sprouts into tending to “a thru w, and don’t forget the x, y, and z,” even though it’s all for such a happy occasion. So, no, we didn’t have no theme for both boys’ doljanchis other than, “Get Yo Grub On, and Watch Our Son Crawl Towards The Object Which Scientifically Foretells His Destiny aka Doljabi.”

I got married more than six years ago and thank God people didn’t ask me “What is your theme for the wedding?”

My “THEME” is marriage. That by God’s grace, my crazy ass is getting hitched.

So, back to these modern birthday parties. Special venues do allow parents to relax as they usually have most of the details covered. Most of the time, even a built-in THEME!

I recently heard my girl, Wendy Williams, talk about her 13 year-old son’s Bro-Mitzvah complete with a celeb date for him to walk around with and recording artists for entertainment, fancier than my wedding. Also on “Basketball Wives,” Shaq’s son, Shareef, got a Bro-Mitzvah with a stylist picking out his multiple couture outfits and of course, per his request, fire.

While I did end up booking the gymnastics academy for Micah’s 3rd birthday party (with a very short guestlist to keep it intimate), I do draw the line at throwing him a Ko-Mitzvah.