time of my life thus far was when I was pregnant with my first.  I don’t even need to say “thus far” as nothing will surpass its top billing as the most wondrous time of my life.

All cliches made sense.  Growing a tiny human (and penis) in my womb was truly miraculous.  Just thinking about it made me want to lift my hands in worship even on the crowded R train during the morning rush (but I couldn’t only because I had to hold onto the pole).

In fact, it was so full of wonder and awe that towards the end of the pregnancy, I worried that when the baby arrived, that Lion King moment would turn out to be almost anti-climactic after 38.5 weeks of the most built-up anticipation.

Yes, a luxurious worry to have during a healthy and smooth pregnancy.

Needless to say, that “worry” was beyond silly as I couldn’t take my eyes off him that first night in the hospital.  Just staring and studying him. Falling in love so fast and furious that we were in our own world.  Hardly noticed when Kevin said he was leaving for the night (I had insisted – no place to sleep and no point in not investing in rest).

Similar to that silly initial “worry,” I also started wondering more recently, if being a mom to an older child would be less of a heartwarming experience since I can’t stare into his eyes while nursing or while nibbling on him any chance I get.

I even asked mom friends who have kids in their teens, “Is it gross?  Your boy’s little girl voice all deepening and them becoming straight up men?  Can you even recall them in their morsel-y baby form?  What’s it like when they are no longer cuddly and innocent?”

One friend said, “But he’s still him.”

Then I got reminded of just how silly this worry is when my firstborn says the darndest things.  He may not be my “baby” baby, but I’m still filled with wonder as I witness him emerging into a Big Boy at 4 1/2 years old, with a new, pointy (single) chin and strong feelings about who should win American Idol.

This list is mostly for me, so I won’t forget these fleeting sound bites.

On current events:  “If Optimus Prime was in Nepal, he could have held up the sky with his arms and kept the ground from breaking with his legs and all those people would not be killed in the earthquake.”

On Mommy announcing that she is going to eat a lollipop with a grasshopper lodged in the middle:  “Mommy, you are being so silly.  Look, I care about you so I don’t want you to eat that stuff, okay?”

On his friend’s dietary habits:  “I want you to drink more milk okay so you can be healthy. You can’t just drink water.”

On Gramma telling him to choose one toy at Wal-Mart:  “One, huh?  This is like American Idol.  There can only be one winner.  One can go home with me but one has to stay.”

On transportation:  “There goes another white bus but that one’s not for the people in jail.  Anyone can ride it.”

On theology:  “So when Jesus died for people’s sins, who are these people?  Do we know their names?  Do we know who they are?”

On private parts:  “Ellis, stop hitting Mommy in her Giovanna.”  (He knows the word “vagina” since babyhood, but after a slip-up, now prefers to call it by the more beautiful girl name.) 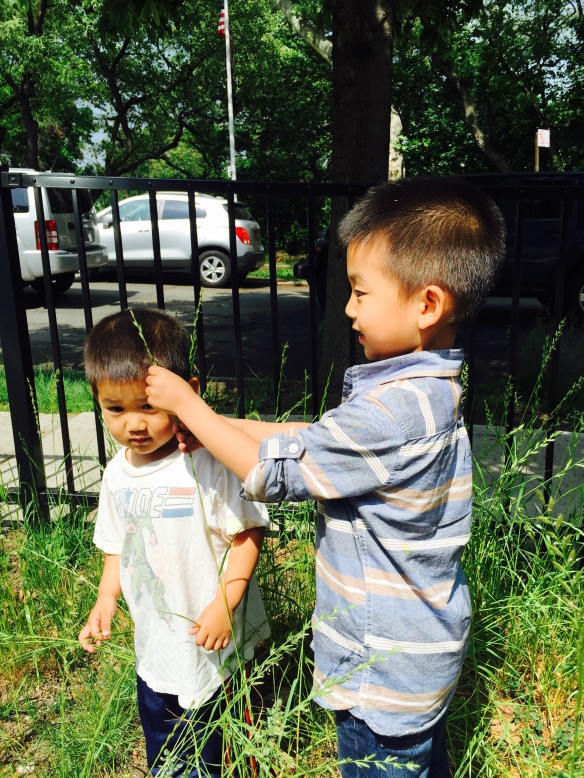 “Ellis, you’re growing up fast but this weed is still taller than you.”