I am typing with you sprawled out on my thighs. Skin to skin.

Around five weeks old, you decided that napping in your bassinet was played out and you craved the warm body mattress of Mommy who is preoccupied with packing.

You grunt like crazy and you have one eye all Round Eye while the other eye is shut, so you look more like Popeye than Olive Oyl.  Daddy looked up “Olive Oyl” recently and we learned about her parents, (Ba)Nana Oyl and Cole Oyl.  And brother, Castor Oyl, who has an estranged wife, Cylinda Oyl!

Not only did you shed your stellar nap skills last week, you very particular about how we hold you.  You don’t want us to look at the phone.  You want us to cradle you, tuck you in an armpit or two, offer up a nipple pillow or Mommy’s still fuzzy belly, with its faint linea negra, a souvenir from pregnancy.

(Now I am nursing and trying to type with one hand because I miss writing).

Daddy and I just celebrated our ten year wedding anniversary on fwine date 07.07.17.  We were able to celebrate in style by going back to Bermuda.  Oh wait, that would be our next door neighbors, not us.

Daddy and Mommy happily spent our anniversary with you while brothers were away at summer camp.  You were our most valuable gift, your little legs with blue Mongol spots, and your nose with two little lines near the entrance of your nostrils, like the creases of a dumpling.  Your swiftly growing rolls make it easier for Mommy to handle you, less nervous than when you were only 5.5 lbs.

One of your first longer car outings was when you were about 15 days old.  We chose the farther, waterfront Costco we frequent when we want both ambience and value.  I felt like a first time mom when you were crying so much from your middle carseat that your brothers were giving us updates on the foaming of your mouth.  I made your dad pull over and we decided to skip the carnival we were going to also just “drop by.”  We are learning to slow down and Mommy especially is working on her fear of missing out.

Your dad doesn’t want you to be in certain enclosed spaces like house parties and our big church but he somehow rationalized Costco and the mall.

Anyways, when I went to change you at the Costco food court bathroom, I saw that someone had left a big turd for us on the changing table.  My fuzzy brain somehow told myself, “That surely must be a prop turd.  Who would be so foul as to leave a real, steaming turd for the next person?”  But why would there be an emoji prop turd?  Even more absurd.

I just remember being so embarrassed to introduce you to this grimy world outside of my womb, where people will leave their shit behind for you to deal with.  I tried to make up for it by showing you the water but it also looked like Law & Order SVU setting, some drunk topless men were fighting over the free soda they had scored, a teenager was passed out next to his bicycle and the bushes, and a couple was about to have sex in the front seat of their sedan.

Ok, this typing with you on me is ridiculous.  I just want to remember everything and blogging is a little more fun than journaling.  Peace out.  Time to fetch the brothers.  Olive You! 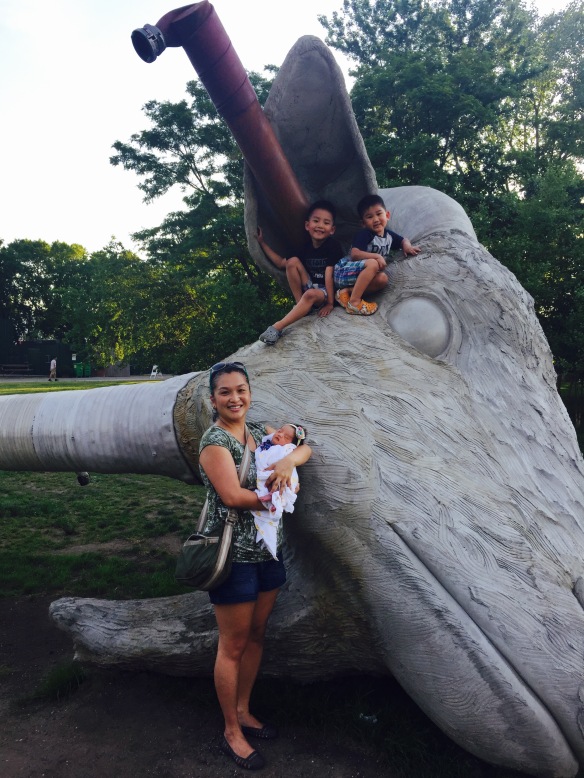 Tried to make up for the Costo turd by showing you the beauty of the sculpture garden next door but there were scary goat displays.  You were still so scrawny that it must have looked like we came straight from the hospital to Costco.  Mommy’s friend said I should have worn a hospital gown.  Realized that this Costco and sculpture garden were the first two places we headed to upon finding out I was pregnant – to load up on prenatal vitamins!