I had noted the triple 6 date but didn’t get excited because I don’t like 6s.  When I see that many 6s, I gotta look down at my nails and shift my gaze.  I did get tickled that catchy dates made my friends holla.

I had a routine dentist appointment this morning and she informed me that I had broken a tooth.  She was sure that it was from grinding or clenching my teeth (even with my nightguard in)!  As I type this sentence, I can feel the jaw pain from the clenching I must be doing in my sleep.

Can’t help but wonder if my clenching has gotten worse considering the devastating news in the world, namely in Orlando, FL this past week alone.

On June 10th, a singer by the name of Christina Grimmie was shot and killed while signing autographs for her fans.

On June 12th, early Sunday, a gunman slaughtered 49 people at a gay nightclub, injuring at least 53 others.  Deadliest mass shooting in U.S. history.

On June 15th, the body of a two year-old boy, Lane Graves, was found intact after being carried off by an alligator outside Disney’s Grand Floridian resort.

All in Orlando within the past seven days.

And the blessing and curse of social media is that our eyes and ears are everywhere, even beyond the big news stories like Orlando, including recent kidnappings and children getting hurt out of nowhere.

I absorb all of this.  And I clench.

I am ever more vigilant.  I lecture the boys numerous times daily about not walking behind me but walking in front of me where I can see them clearly.  I even demonstrated what could happen if they continue to walk behind me but they enjoyed the dramatic snatch-demonstration too much:  “Do it again to me, Mommy.”

Excuse the clumsy transition as I have to eat lunch now but our family is in a season of life where we are awaiting next steps.  Blessed and intact but also hoping for change.

I heard a sermon yesterday called “Meantime.”  How sometimes we just want to know what’s up next and when we can get goin’ on Next and when He will provide for our immediate future, the prayers we been lifting up.  But then we end up treating the present like an afterthought:  “Man, I can’t wait ’til ______….in the meantime (sigghhhh)…” and poor Meantime is treated like some neglected stepchild (sermon by Toure Roberts).

The tragic events of this past week have made me extra thankful for my Meantime.

Though waiting on Him to answer prayers, I am pausing to memorialize our 06.16.16 Meantime, which included a Morsel-y Mundane Marvel of a Moment where our whole family stumbled upon an ant colony during an evening walk together after dinner.  We squealed, poked sticks and wondered aloud.  I then went for a jog so I can watch the sky.

The lives lost in Orlando made me realize all over again that we Moms just want our kids to be one thing, fine, two things when they grow up:  alive and well, and the rest is all noise.

Thank You, Lord, that I get to have a Meantime.

Rest in Peace to those lives lost in Orlando this past week.  You will not be forgotten. 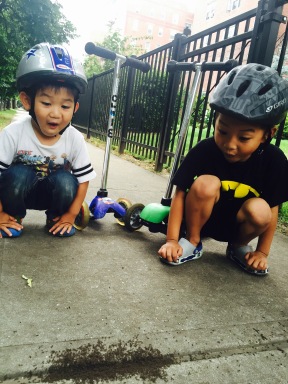