When I was a little girl, I used to do this weird thing when my little brother and I would get into a particularly bad fight. He would start bawling so I would feel bad and want to rewind the clock to a more peaceful time. So, I would leave the scene abruptly, walk back into the room with a new, kind face and say, “OhmyGod! Why are you crying, Sang!? WHO…WHO DID THIS TO YOU!?” Sang would be bewildered because the answer was, “YOU did this to me! I’m crying because of you!” (Sorry, bro. Your Nunah has always been a tad crazy).

I was reminded of this as I realized this week that My Most Effective Comforters on my hard parenting days are the very ones who got me in a tizzy in the first place. When Ellis Mr. Still Chubby Cheeked Circle Eyes pats me softly and says, “Mama!? MAMA!? Soh-wee!” and when Micah the Earnest says, “Mommy, you smoove like baby – I want to squeeze you! You look like a baby when Daddy hugs you,” I feel like I was completely crazy for ever getting exasperated with them.

The precious moments carry you through the tough moments. I read somewhere that it is Mother Nature’s design for babies to be so damn cute to fuel parents to want to take care of them. Or something like that.

A couple weeks ago, we were at a park when some older boys, ranging from five years old to ten years old, made a beeline for our picnic blanket and asked Micah and his homey, E, if they’d like to join in on their pick-up soccer game. Our boys looked at each other, sheepish, surprised, and excited. E first declined their invite immediately and Micah agreed.

Just as immediately, they changed their minds and got up for their first pick-up game.

I looked over at my friend and said, “Well, this is just gonna be too cute!” as I felt some Feelings again about how my firstborn is growing up so fast.

The Captain, the ten year old, started reciting the rules in rapid succession. Going over fouls and goals and other jargon that Mama’s mind shuts out automatically, just like when Daddy tries to tutor her on football. Micah and E also had similar quizzical expressions on their faces like, “Whaddid we just get ourselves into?”

As a few of the boys began constructing the goals with rocks, Micah and E ran around hugging each other. Being on opposing teams wasn’t sinking in, apparently.

When they were told, “Alright, let’s start the game!” E quickly responded, looking worried, “I don’t want to play any more!” Micah chimed in, “Yeah!”

This mental picture is one of the gazillions I need to recall when Micah just won’t listen and I forget that he is still only three.

I will remember just how innocent and little they looked among the bigger boys, not understanding or caring about the rules, instead just wanting to hug their friend all over the field on that beautiful summer day.

Thanks for comforting me in those hard moments by just being yourselves, my sons. 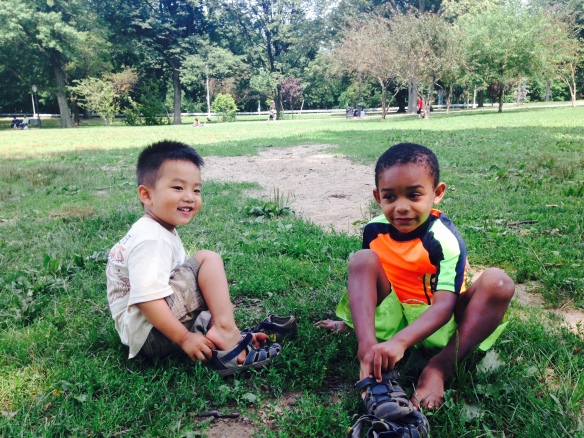 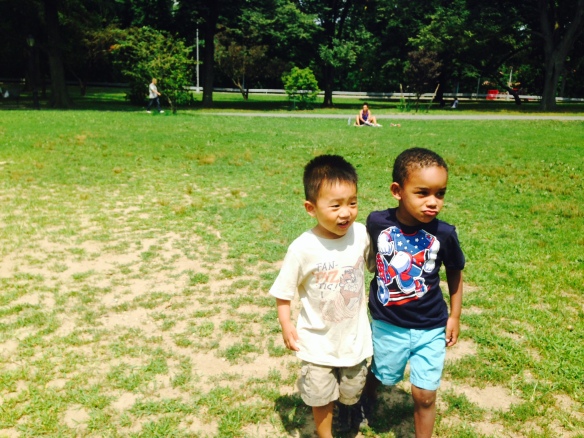 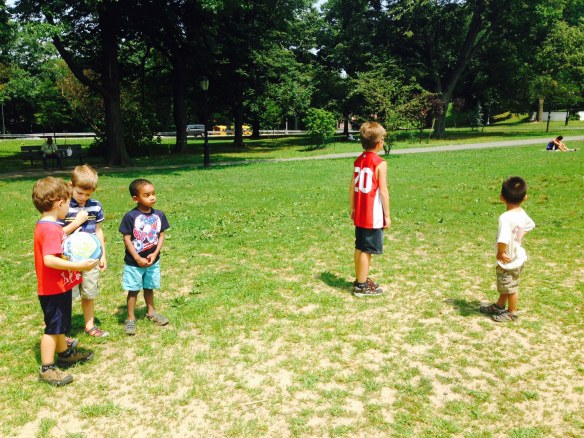 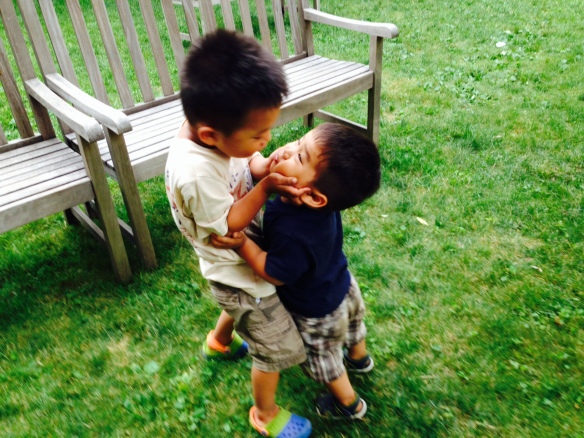