Things I Need NOT Cross Off My List before I croak, and am more than fine with never experiencing:

I have never eaten an Arby’s sandwich (or an Arby’s anything).

I have never gone to Applebee’s. I had to look up how to spell it (Applebee’s or Appleby’s? apostrophe?).

I have never had a nosebleed.

I have never seen any of the Star Wars movies.

I have never had a coffee or soda habit.

I have never been to a Chuck E. Cheese.

Chuck that. I had never been to a Chuck E. Cheese…until two Sundays ago.

Kevin takes the boys there on his own every now and then, especially during this endless winter when outdoor play is not an option. They visit their friend, Chuck, to give me some time to myself. It’s become their boys’ club.

When I was sick one weekend, Kevin hit up the usual spots with the Li’l Kims. They’d already explored the museum and mall, before he sent me an iMessage (technically, I still don’t have text on my phone):

“We going to Charles E. Quest.”

Later, I found out that he had meant to type “Charles E. Queso” for “Chuck E. Cheese” but autocorrect had struck.

I’d always been certain that I would naturally loathe the place. I have zero interest in video games or arcades. In fact, they give me major headaches. Can’t deal with stale air. Hate mice, hate noise. And terrible pizza is a terrible waste of calories.

On another frigid Sunday, the boys were headed to see Chuck again and I needed to stop by Target within the same mall so the boys’ club gave me a ride. I realized that passing by the boys’ stomping grounds with nary a looky loo was just plain silly. NOT going somewhere JUST to keep the Never-Been-There routine going was pointless, so I dropped by to see what this Charles E. Quest had to offer.

Immediate thought: Good Lord, this must have been what the Superdome was like after Hurricane Katrina.

Teeming with too many children and too many weary parents.

Dirty. Even the air. Stank like parmesan cheese stuffed into a pair of size 12s. Well-worn size 12s. And balls.

No order. There were no sections. No separate eating area from the game area.

Where you ate was smack dab in the middle of where you played.

Kids taller than me were running around. Fast. 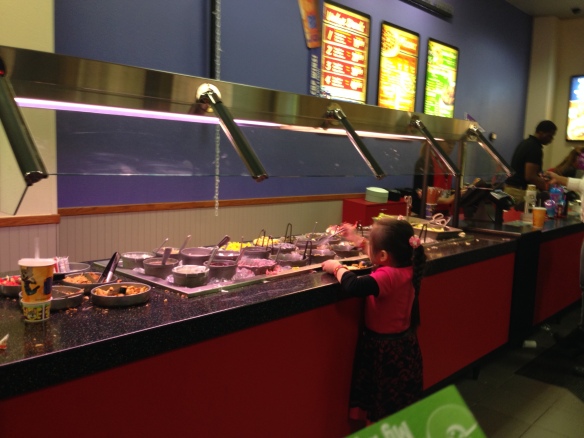 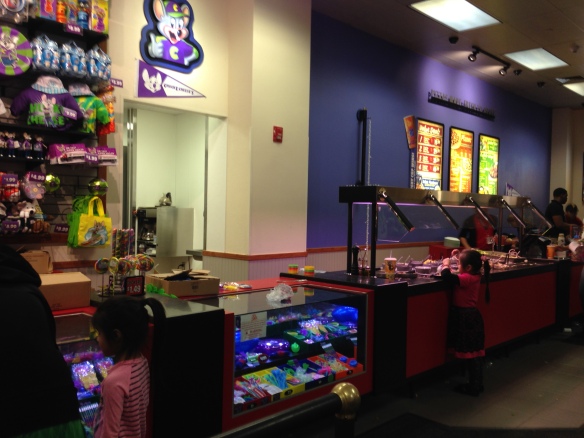 I had to call Kevin to locate them amidst the din and blinking lights.

He saw the “Oh, uh-uh!” look on my face as I took it all in. The boys were entranced by sensory overload.

“How can this really be your first time here? You never went as a kid? You really that surprised – whaddid you expect?” he CHUCKled.

“I thought there would at least be sections so that you can eat and THEN get your game on. You actually volunteer to come to this Superdome with the boys!? Is that really a salad bar or are my eyes wigging out from all these flashing lights? I could imagine an ICE CREAM bar next to the prizes, but SALAD? In case you just have to have some greens while up in this piece? Look at that canned baby corn, just waiting for someone to holla!”

But then again, Kevin loves video games so he’s probably been waiting to have kids so that he can swing by a spot like this on the reg.

It wouldn’t be wholly fair if I gave this spot a 100% negative review. At least it is free admission unlike every other kiddie play place. But “You get what you pay for!” never rang truer, especially for highly sensitive souls like me, with my supersonic hearing and low threshold for noise.

Charles has another thing going for him – his security. I wasn’t able to walk out with Micah and Ellis because they had come in with their Daddy. I had walked in alone after them, thereby not receiving a stamp on my hand. When you enter, an employee stamps everyone with the number of people in your party, and will not let you leave unless everyone in your party is present to leave together. So, the boys got to leave, only with Kevin, once their infrared stamps marked “3” were verified under the special flashlight. I liked that.

This is a much needed security measure as this is THE backdrop for a Lifetime movie about a desperate dad abducting his child after a bitter custody battle, while the boy is hunched over a game of “Need for Speed” (after a trip to the salad bar and token redemption bar).

Chuck E. Cheese’s: where a kid can be a kid…and Daddy can play video games, and have wings and greens…and Mommy can swing by at the end for a cute family sketch that only costs one token or approximately 33 centavos.