Since the last post, we have officially become a family of five.  Thank You, Lord.

Our tiny Olive Hope Kim is already 12 days old today and just about 6 lbs after losing then gaining lotta ounces.  She was nearly Olive Poema Hope but a family vote knocked (my) choice out pretty much immediately though I campaigned for it after I heard a sermon on Ephesians 2 on our being God’s “Poiema,” God’s workmanship and masterpiece.

I also considered “Clementine” for a split second when I had to rush to the hospital two days before her birth, but the back story is just gross and not meaningful.  She is the only one of my kids who took me to the hospital before their official arrival.

I am itching to write for the sake of writing and sharing and feeling more myself, though some of this is while holding Olive.  I want to feel more balanced as I’ve been nursing ’round the clock and trying to catch up on sleep in short little spurts during the day.  Sleep deprivation is a beast especially after I’d been sleeping soundly for years.

I took the boys to get their hair cut yesterday when they were home for Chancellor’s Day, one of THREE days off from school this month of June. 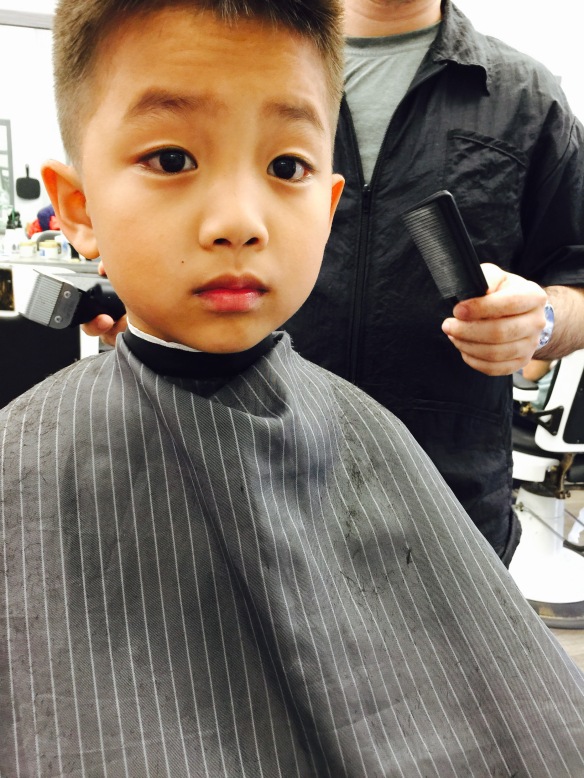 Their barbers were asking me details of how I want their hair to look and I loved that they cared enough to ask.  But I closed my eyes for longer than I had planned and said, “Can you please excuse me for a moment?  I haven’t been getting enough sleep so I can’t even answer the most basic of your questions.  Just one moment.  Please forgive.  Thank you.”

Micah had been home with me four out of five days that week, with a bad cough attack similar to what had landed him in the hospital nearly a year ago.  I felt bad for him as his cough shook his skinny little body but I confess I also felt sad that this possible final week of being pregnant was not as restful for me as I had daydreamed about.

I went to go use the bathroom while Micah coughed away on the couch.  When I wiped, a clementine-sized sac protruded from me.  Though I knew it was NOT the baby’s head as i was in no pain, I completely freaked out and started crying, imagining myself on a reality show, Geriatric Multigravida Gives Birth in Co-op Toilet While Son on Nebulizer.

I called my doctor and the nurse told me not to get up.  But how could I not.  I had to pack for hospital and get someone to come over.

I called my friend, our emergency contact that God had provided.  My biggest fear of going into labor was that no one could take care of my big kids especially if I had to go in the middle of the night.  Our friends graciously and gladly offered their help, a true answer to prayer.

I got Micah’s albuterol treatment started as my friend rushed over.  Her husband was ready to pick up Ellis from pre-K later that afternoon.  I was beyond grateful for these helping hands that allowed me to get to the hospital without worrying about my boys.

Once I got to the hospital, the nurses asked me lots of questions.  I told them that all morning, I felt something different down there, almost like I was sprouting a penis.  I kept telling them it was a clementine sized flesh sac/water balloon that decided to hang out when I was on the toilet.  The nurses tried to make me re-enact what happened but the clementine hid itself.  They also told me that my descriptions were disturbing and terrifying.

Since they could not figure out what happened, I was discharged.  They said even if they had figured out exactly what was protruding, the baby was doing fine and there was no reason for me to stay in the hospital.

They advised that next time, I take a picture of the clementine.  I berated myself for not doing that in the first place.  Kevin assured me that I was normal and not a perverted sicko, to not think of taking a picture of my privates during that alarming moment.

So that is the story of how 5.26.17 was an alarming day leading up to her actual birthday.  We ended it happily eating Chinese food with our dear emergency contacts, not knowing that baby would be arriving within 48 hours.